When you go on holidays you usually have a idea of what you expect to find and a little part of you that wants to be surprised. Well, you just have discovered that amazing place in Ibiza: Atlantis.

Atlantis is not a beach or a cove as anywhere we have beeen or seen before on the Mediterranean coast, is a unique and magical place in Ibiza.

Much of the magic of Atlantis is due to its strange rock formations caused by the hand of man, which removed much of the sandstone that form the walls of Dalt Vila XVI century. All cuts in the rock, most diagonally, have created some strange structures where walking is as fun as magical, so being in Atlantis is like living in a «wonderland». 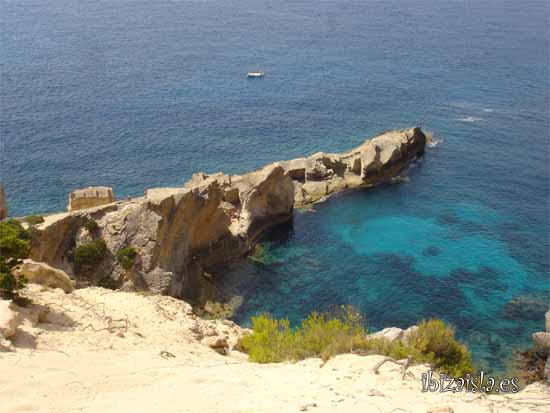 Hippies who came to Ibiza in the 50s and 60s where amazed when they arrived to Atlantis, because they chose this site as a place of worship and rest. Since then, the rocks have been decorated with carved figures of fish, Buddhas and calls for peace. Also in Atlantis is one of the few points of Ibiza in which it is still possible to observe the presence of hippies: a cave with a Buddha figure half way down to the sea and under a large rock just above the main platform of Atlantis are the usual places of meeting of hippies. 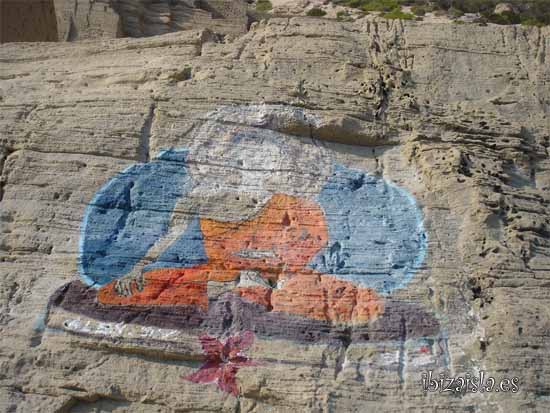 The cuts in the rock have also created holes under the sea level, which are filled with water from rain and waves forming some incredible natural pools.

Being a place so remote and so hippie influence, Atlantis is an area where the usual practice of nudism. Many young people take advantage of the sun is constantly beating the cove to tan their bodies. The only downside for nudists is that rock platforms are not comfortable places to lie, so it is recommended to bring a couple of towels or mats to lie more comfortably. 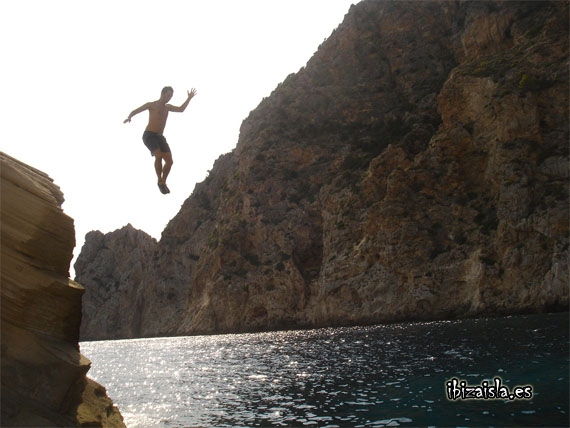 Need more points for Atlantis? The water is incredibly clear and sand bottom areas show an incredible blue water. Moreover, thousands of fish are attracted by a quiet water: a luxury for diving enthusiasts. In addition, Atlantis rocks can be climbed to reach places from where you can jump, there is always someone who dares! We recommend caution, some people has been hurt after a good belly flop … 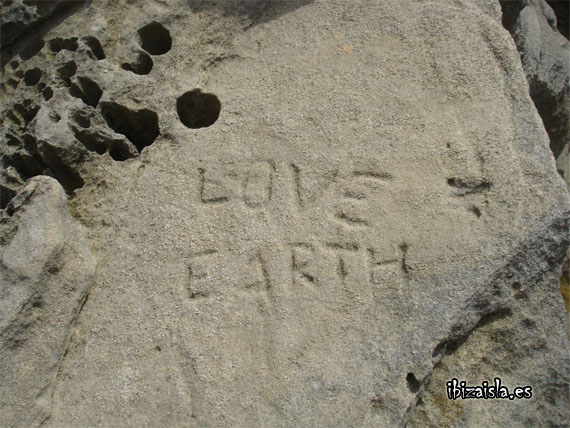 Atlantis is a new name based on the myth of Atlantis, the island lost at sea due to the strange appearance of this place, which seems to be in a different world. However, we must clarify that the real name of Atlantis is Sa Pedrera (stone quarry), for being sandstone extraction site. Similarly, the defense tower that can be seen from the sea at the top of the impresive cliff is the Torre des Savinar, although is known as the Pirate’s Tower (Torre del Pirata).

How to get to Atlantis?

If you ask Ibiza people, many of them will not even heard about Atlantis. It’s a perfect secret and official Ibiza beach guides don’t offer information about this nudist cove.

First of all, we want to inform you that going to Atlantis to take a whole day: by the time it takes to get there, and especially when you come back, because we assure you will be very tired.

To reach the beach of Atlantis in Ibiza, you have to follow the road sign to Es Cubells, southeast of the island, with the famous Cala d’Hort. At the moment behind a mountain pine starts to poke the top of Es Vedra, the imposing island, watch for turn left, there is a small sign indicating the turnoff to Sa Pedrera. After a dirt road, you will come to a small terrace where you can park your car. By the way, entering a detour near the tower will reach the Torre des Savinar, with fantastic views of Es Vedra. 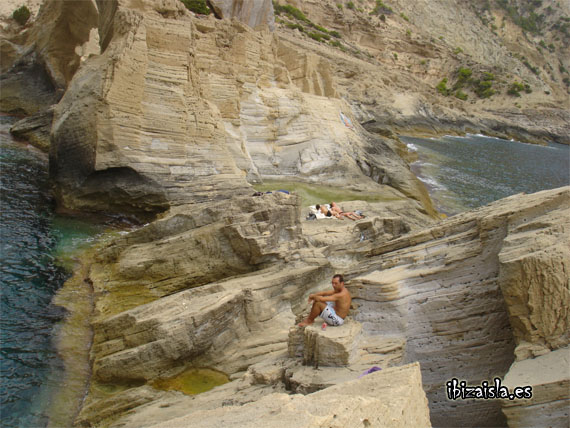 On the way down to Atlantis, you will see on the right a towering cliff where climbing is practiced. If you are a climber, this is one of the best Ibiza spots to practice your favourite sports. But Atlantis is down: we recommend wearing sneakers for the road. You won’t miss the way, although there will be really tough sections with areas of rocks, gravel, roots and dunes that are extremely hard, especially in you way back home.

Of course, Atlantis is recommended for young or very athletic, we caution that it is hard for those not used to exercise. As last recommendations, bring sunscreen with you as there is no shaded area in Atlantis . Finally, take a snorkel. You will be able to use them to explore the seabed, and watch out for jellyfish, ver common in the area as they are swept by constant currents. Please respect and enjoy Atlantis, one of the best beaches in Ibiza.